how are towson and baltimore county demographics similar to their peers, and where are food safety violations happening in Baltimore?

How Does Towson stack up against other college towns in the Northeast and mid-atlantic?

By Alexis Terry
​May is a prime time for college decisions. Typically, students have their minds made up and are sending housing deposits to their college of choice.

“I had no interest in coming to Towson until I visited and knew it was perfect for me,” said Kayla Hester, a junior at Towson University. “The surrounding area and the size of the campus itself was exactly what I wanted.”

Hester also was drawn to the bar scene nearby. “At the time, I wasn’t going to the bars because I was underage, but now that I’m 21, it makes it so convenient to go out because I can walk to and from,” she said.

Kelly Cadwallader, a junior at Towson University, had a similar mindset when choosing colleges.

“Towson was not my first choice, but I didn’t even have to walk on campus to realize this is where I wanted to be,” she said. She explained how much she loved the surrounding area in terms of what was available for things to do in her free time. “It was like I was in a city, but I really wasn’t. It was the perfect balance.”

Cadwallader is now a student ambassador for Towson’s admissions office, where she deals with students choosing among colleges every day. She has found that her experience is commonplace -- many students fall in love with the surrounding area of Towson and it, in fact, is the deciding factor for a lot of students.

Restaurants and retail shops appeal to many students. They like that everything is close by. Most first-year students do not bring their cars to campus, so having everything in close proximity is important to them, Cadwallader said.

Students that Cadwallader speaks to in the admissions office are largely choosing among colleges in the Northeast. An analysis of the towns where these schools are located -- 50 with populations between 20,000 and 2000,000 were randomly selected from the U.S. News & World Report's Northeast regional colleges list -- found that Towson fares well in many categories.

“Towson students are living in a wealthy community,” said Sherri Billheimer, facilitator of the Community Development and Global Citizenship program at Arundel High School. “Students choosing to live off campus have to battle with affordable housing in a college town populated by wealthy adults."

The Community Development and Global Citizenship program works with different communities to help students grasp the understanding of what it means to be a “passionate and engaged” future leader in not only the local communities they are in but their global communities as well.
​
Towson’s poverty rate is considerably low
Poverty Rate
Infogram
For Towson’s relatively urban surrounding, the poverty rate still remains lower than the average poverty rate of Northeastern college towns students are choosing among. Most of the Maryland college towns have a poverty rate under the average. The outliers are towns like Salisbury (27 percent) and College Park (30 percent). Both of these towns are young as far as median age goes, which could contribute to the high poverty rate.

The median age for Towson residents is 34
​ 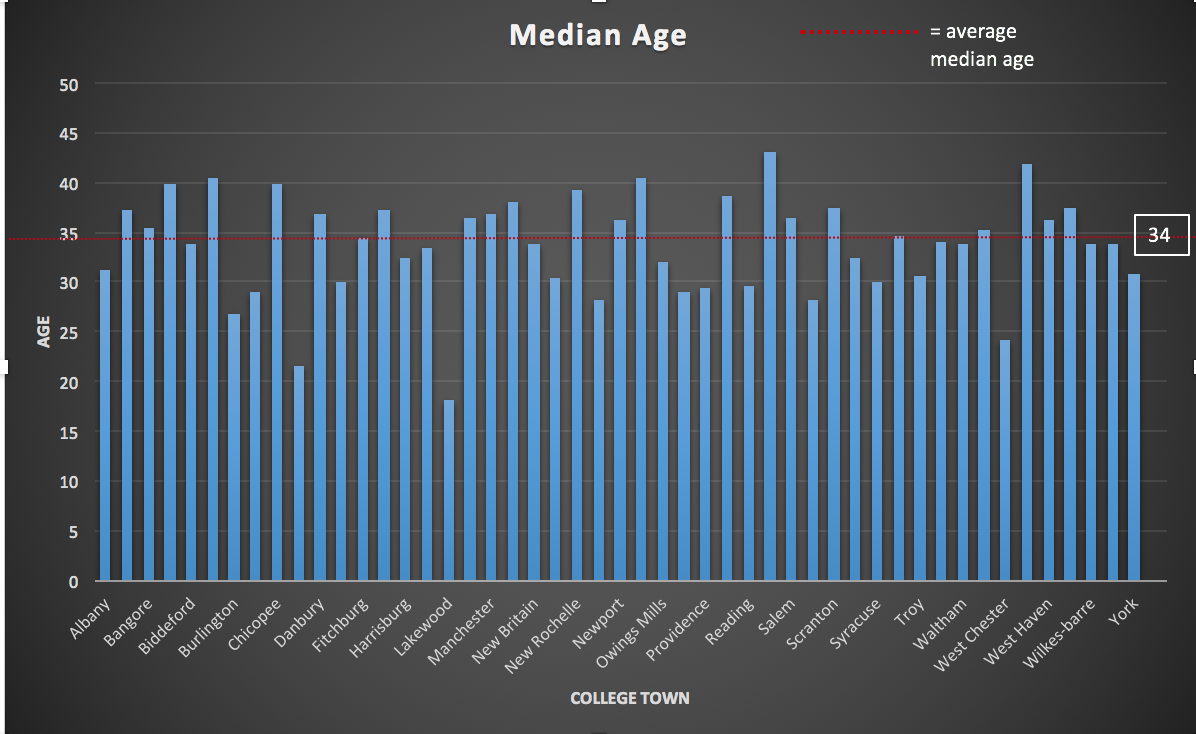 “I considered the town of Towson to be pretty diverse,” Cadwallader said.

Billheimer explained that it is easy for urban-suburban areas like Towson to be mistaken as diverse. “Students see the urban infrastructure of the town and assume diversity because urban places are traditionally diverse,” Billheimer said.

In addition to office spaces and healthcare careers in Towson, it is also made up of service sector jobs that minorities traditionally hold, that may come from more diverse neighborhoods that lack job opportunity, so it is easy to confuse the actual population working with the people working in their population, Billheimer explained.

“The data surrounding the people of Towson does not surprise me,” said Billheimer. She explained the demographics work together. “High household income, low poverty, an older community…higher household income.”

However, college town data does not take the students into account because they are not permanent residents of the community. If students were taken into these measures, the numbers would change drastically.

Population for 50 College Towns
Health Care & Social Assistance is the Top Industry
Infogram
​The U.S Bureau of Labor Statistics cites nursing as one of the fastest-growing careers in the country. Billheimer talked about the high school seniors she works with at Arundel. “Many of them are interested in healthcare professions because that’s where the money is.”

Like the majority of college towns in the dataset, Towson’s top industry is healthcare and social assistance. This can be attributed to Towson being the home of three primary sources of healthcare in the area: UM St. Joseph Medical Center, Greater Baltimore Medical Center and Sheppard Pratt Health System.

The data illustrates that Towson is a livable place for established adults. But is it a “livable” college town?

“Yes and no,” said Hester. “It’s expensive to live close to campus, and the town doesn’t exactly support college students like how easy it is to get kicked out of your apartment just because the neighbors don’t understand that you can’t raise a family in an apartment building with majority college kids.”

Added Billheimer: “One of the most important things as far as community is concerned is that the town supports everyone -- a town where the university population works in unison with the townspeople."

Mia Grau, a sophomore at Towson, enjoys sharing the space with families. “Towson has a home-y, yet updated feel. Being surrounded by homes makes it feel lived in and not so alienating"

​Cadwallader is approaching her senior year at Towson, where she will continue to advocate for education, but in a different way. She is entering the teaching profession following education. She is excited to see how Towson transforms in the next years as interest from prospective students across the region is growing.

By Caroline Flannery
Baltimore City Councilman Brandon Scott, a Park Heights native, grew up noticing that when food establishments in his neighborhood closed, the people in his community were never aware of the reason behind it.

Prioritizing government transparency as well as the health of city residents, Scott -- along with Baltimore Health Commissioner Dr. Leana Wen -- made city history in 2016 by introducing a website that gave residents the ability to look up restaurants and view health inspection reports.

While Scott’s bill that proposed the idea of implementing a restaurant health grading system lost by one vote, he immediately came back with a bill to make all food establishment closures easily accessible online.

“This is to highlight and focus on the worst of the worst,” Scott said. “And that’s why we did it, because this is about health.”

Scott points out that these restaurant closures have an importance that is commonly missed, and a connection to a problem that plagues Baltimore: violence and poverty.

“In East and West Baltimore, where you see most of these [health violations] happen, these neighborhoods are also the ones where the food deserts are, where the violence is, and these things are interconnected,” Scott said.

Transparency and accountability are needed to address this situation, according to Scott.

“We have to understand that we have to hold these businesses more accountable because we know that this is contributing to the bad things that are happening in neighborhoods," he said.

Since his movement to increase restaurant transparency began, Scott says citizens have been reaching out on social media to inform him of health or safety violations.

“This is one of the most popular things that the health department, the city and myself put on social media,” Scott said. “We get complaints now, I get tons of them from people who see stuff happening at restaurants and they send us videos, leading to more closures.”

Scott said that this positive response to online accessibility shows the results that increased transparency can have on a community and supports his push for a grading system.

“We know people are paying attention to what they see, because we see stuff being shared over and over again,” Scott said. “That’s what the desired impact was, to have people know what’s going on in the city, and now there’s a groundswell support as we will again discuss full on restaurant grading as the citizens of Baltimore have made it clear that they want this to happen.”

Scott said that the bill for restaurant grading has been reintroduced and he hopes it will be passed sometime this fall.

While the response to the website has been mostly positive, a few restaurant owners have complained that this is hurting their business, according to Scott.

“They’ll see it on social media and say that it’s unfair to their business, it was just one instance,” Scott said. “But the truth is that one instance is still an instance, no one is saying you can’t recover, but the health department is very clear about why the places are closed.”

An analysis of the data shows that rodent/insect infestations were the most common violations that led to closures in 2017, with 73 instances. This was followed up closely by licensing violations, with 71 instances, and unsanitary conditions, with 70 instances, according to the Baltimore City Department of Health.

Scott said that with this information being made public, businesses are now more inclined to invest in rodent control companies to get the problem fixed.

Reasons for Closures
Infogram
Neighborhoods that are home to many carry-out establishments that have frequent violations typically are categorized as “healthy priority areas,” which tend to disproportionately affect black communities.

Called “food deserts” in the past, the new name is more accurate, as the problem is not a lack of food, but a disproportionate amount of access to unhealthy foods.

To be considered a “healthy priority area,” a neighborhood must have a low measure of food store quality, a low median income, have more than 30 percent of households without cars and be more than a quarter-mile from a supermarket.

“Some of these carry-out places are in healthy priority areas are places where people are feeding their children dinner from consistently and they shouldn’t have to do that regardless of the financial situation that they live in,” Scott said.

Scott said the reason he fought so hard for his bill was for the health of the people of Baltimore.

“When you already don’t have access to fresh food, and then the food that they’re eating which is inherently bad and then you have rat feces on the food too, that can have a terrible effect on people in the community,” Scott said.

Thirty-one percent of closures in 2017 fell into the category of markets, which typically consist of the corner stores that are in healthy priority areas, and 28 percent of closures fell into the category of carry-out establishments that are also typically in healthy priority areas.
Untitled infographic
Infogram
Tyree Pounds, a recreation leader at Rita Church Community Center, sees the effect that the lack of awareness and accessibility of food establishments can have on youth.

Working at an after-school recreation center for children ages 5 to 17, Pounds says he is disheartened to see children coming in everyday with carry-out and junk food.

“The parents don’t know of healthy alternatives, this is what people in these parts of the city eat,” Pounds said.

Pounds said he travels far from his East Baltimore home to get his food in order to avoid the unsanitary places.

“It’s interesting that there aren’t any fresh healthy food stores in my neighborhood, but there seems to be a fast-food establishment every 5 miles or so,” Pounds said.

Pounds said he hopes parents are more knowledgeable about what places are safe for their kids now that the information is so easily accessible.
Powered by