How diverse is Broadway?

By Marisa Rubin
​
For Meg Kelly VanLent, a theater professor at Towson University and lifelong actor, following her dreams was easy. It was theater. VanLent went to the University of Delaware for her undergraduate degree in theater and got her masters in performance from Michigan State University. She teaches directing in the classroom and is no novice when it comes to acting.

For women like VanLent who reach the pinnacle in their field, winning a Tony Award can be the culmination of years of hard work. But it's a rarity. An analysis of Tony Award winners from the past 50 years shows that men dominate in production categories like directing, producing, songwriting and lighting. There are, of course, dedicated awards for women (best actress, for instance). But when categories are open to both genders, men tend to dominate.

In the production categories -- that is, people who aren't on stage during performances -- 553 people won awards in the past 50 years. Women won just 92 of those awards.

People men v. women
Infogram
VanLent said women have historically been heavily involved in theater -- and in the Tony Awards.

“It’s ironic, the American Theatre Wing (who votes on the Tony Awards) was founded by a group of women including Antoinette Perry, whom the Tony Award is named after, at the beginning of WWII," VanLent said. “Originally it came to be during WWI as an outreach of support for soldiers, but Perry took it into a more theater-focused organization.”


But maybe Broadway still sees women as domesticated? The category for which women won most often: Best Costume Design.

“For a long time women’s fashions were designed by men,” VanLent said. “Women even had to push themselves into that realm, although it was probably a much easier push than into lighting, scenic design or even writing.”

Diane Smith, a middle and high school theater teacher and director, has been involved in theater for 43 years. She said costume design and choreography have always been assumed to be female categories.

"Although it has taken a long time, we have more female designers, directors, musical directors and composers [than ever before]," Smith said, “I think there is a definite disadvantage with auditions and casting. Men certainly have the advantage in numbers. The ratio favors the males. I think with the other areas, directing, production roles, women have to prove themselves in these ‘male’ categories so there proves another disadvantage."

VanLent said there is room for recognition of women to increase.

“It is recognized regionally that women need to grow in this industry" she said. “Across the country, there has been a push for regional theaters to have a season, or part of a season, focused on women playwrights and directors. The shows nominated for Tony Awards typically come out of these regional shows. They get moved on sort of a pathway to New York."

Lizzie Jaspan, a graduate of Marymount Manhattan College who majored in playwriting, said she is optimistic because she sees women interested in the field.

“Most people in my program were women, and not just the students, the professors, too," she said. "There were six directing classes per semester and roughly 95 percent were taught by women, all of whom have directed professionally.”

Winning trends over the years

awards won over years
Infogram
Added Jaspan: “There was always a great diversity within the theater, and sometimes there were even so many women that they had to play mens roles, which is not uncommon in middle and high school theatre.”
​
When asked about the diversity of genders in her high school theater program, Smith said: “At Beth Tfiloh I have a lot of men who want to be onstage rather than on tech crew. I have a young man who is currently the rising star of the basketball team, but decided not to play this year so he can be in the musical, The Addams Family. We are lucky at our school that there is not a negative stigma in place on being in the shows. I also have my definite tech people who have no desire to be onstage but they are both male and female.” 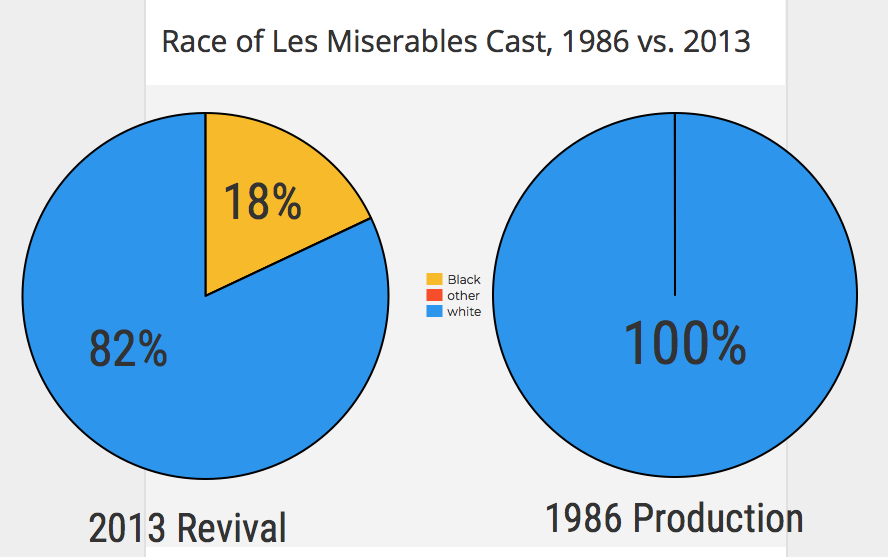 The data show that of musicals done in 20th century (1960-1994), only 5 percent of actors and actresses were minorities (any non-caucasian races) out of 195 people. 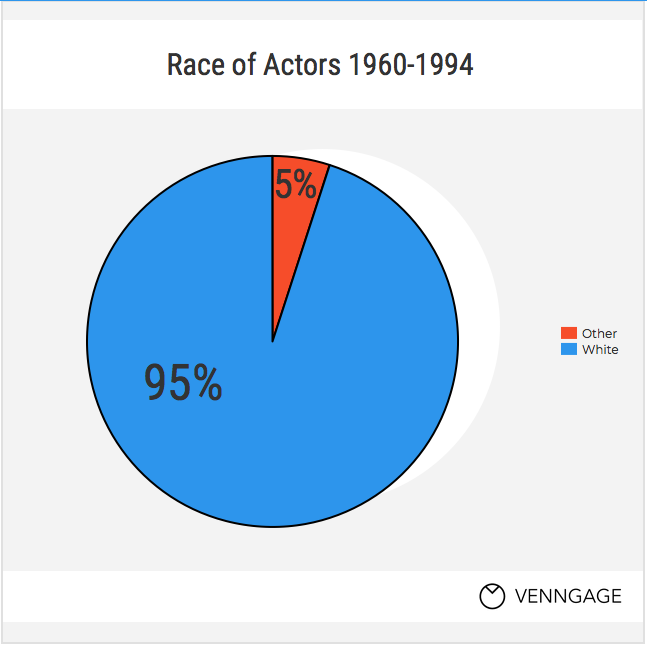 Becker said that she once interviewed Latino actor John Leguizamo. He told her that when he first came to the United States, he could only get cast as a rapist or as similar criminal-like roles because he was Latino.

Taylor Rieland, a professional musical theater actor in Washington D.C. and Baltimore, said that in his most recent show, Assassins, the assassins are traditionally all white, but his cast included one Asian and one African-American actor in roles as assassins.

Rieland said that when he gets directing opportunities, casting people based on the intended race of a character is not that important to him, unless, of course, the race of the actor is crucial to the plot.

“I cast who is right for the role,” Rieland said.

Added Yakima Rich, a black acting major at Towson University: “All I simply require is an equal playing field, to not live in a reality where so many roles are simply not 'preferred' for me to play because I am a black woman."

Rich, who most recently played the lead in Towson’s Pride and Prejudice as Elizabeth Bennet, said: “I do believe there is naturally more role availability for white actors, simply because of the classic algorithm when it comes to narrative and the method of storytelling. The majority of the storytellers and stories being told are reflected and portrayed by those who traditionally identify with such.”

Rich said that she believes her race absolutely plays a part in the roles she receives, although she has been cast in roles that are not traditionally played by black women.

“But those casting-related choices are not always made. And there is not an even playing field with diversity in narrative,” Rich said. “ Also, with the strong existence of stereotypes, my race plays a major part in how I am perceived, and the types of stories I am deemed suitable to realistically tell." 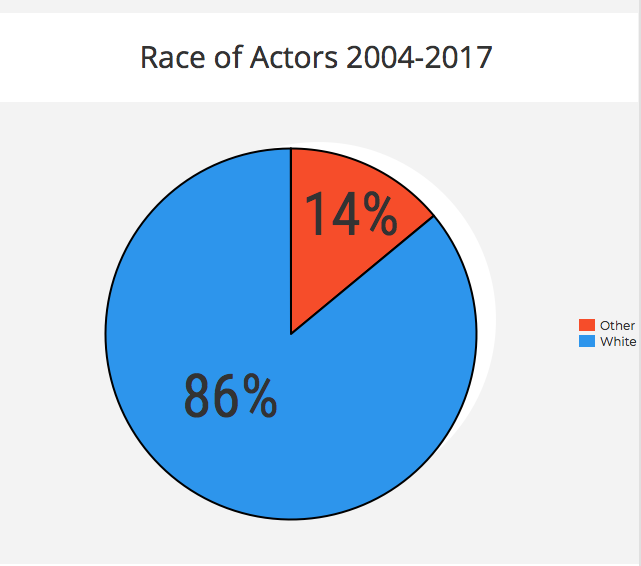 The 20th-century musicals included more actors than actresses, but in more recent years, roughly the same amount of men and women were cast.

On Broadway, it is easier for women to be cast than it used to be. Revivals consisted of roughly 48 percent female and 52 percent male casts. The professional musical theater world from 1960-1994 included roughly 40 percent actresses and 60 percent actors.

Becker said that there may be fewer parts written for women in musical theater, and when it comes to gender, “I’m all about open casting whenever I can.”

​Added Rich: “As far as gender, I feel I have received much more opportunity for non-traditional roles."

Rieland said that he feels the competition is more difficult for female actors in the musical theater world, simply because there are fewer men than women who are drawn to the theater. 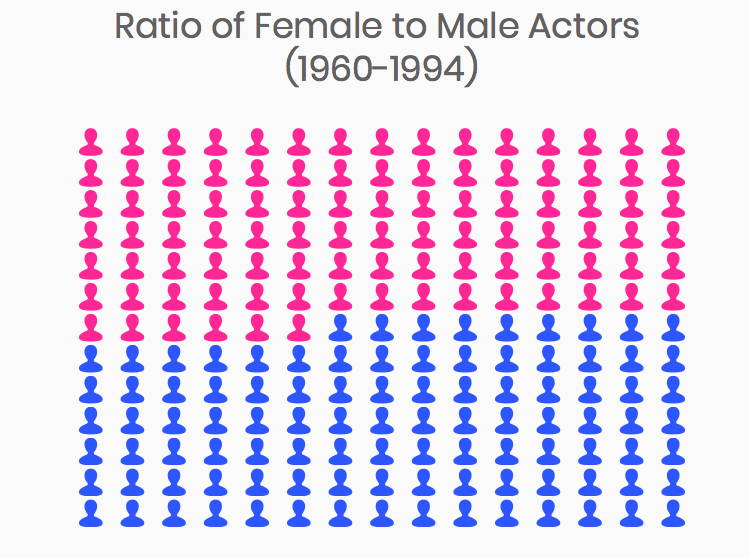 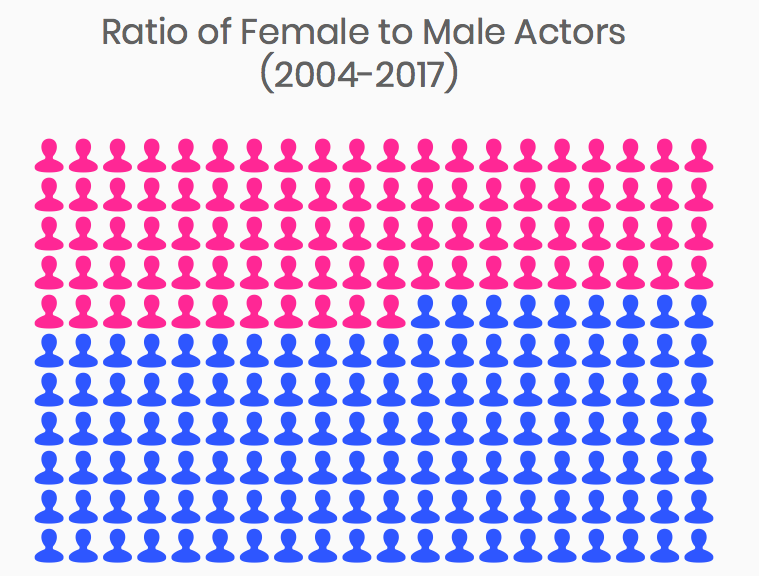 Of revival shows, the professional musical theater world has only cast 9 percent racial minorities (meaning any non-caucasian race) out of 416 actors

Black actors and actresses make up 78 percent of minorities represented. 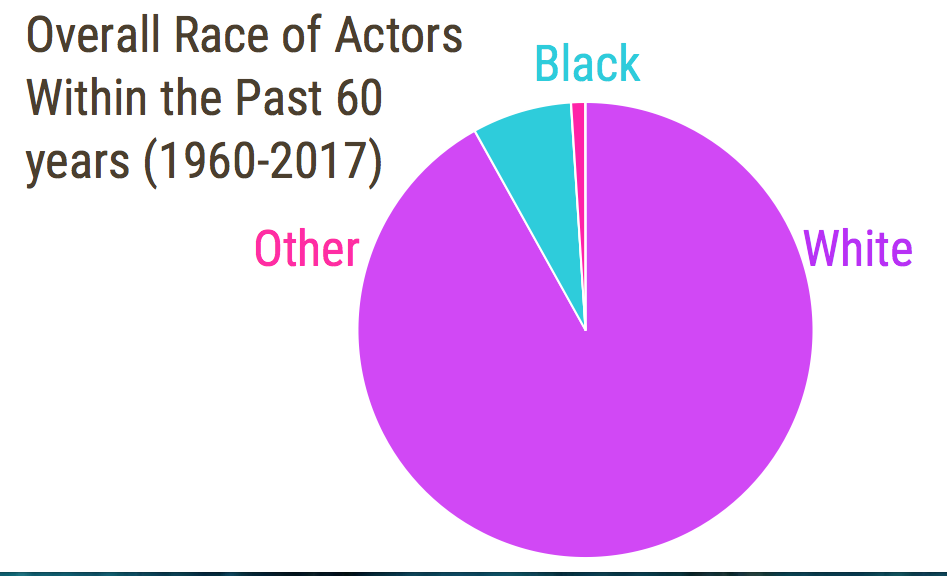 Rich said that in terms of casting and narrative, we are currently in the midst of a change when it comes to diversity.

"Many more are starting to demand the change they wish to see, for the world they wish to see, and it is only natural that art has to reflect that," Rich said.  “Though harmful stereotypes are still being perpetuated that many black actors are still asked to portray. But the changes happening currently are indeed opening up the number of roles available to me."
Powered by